As a child of the early sixties, a partially deaf one at that, I would spend many an hour with my one good ear up against the grill cloth of an old radiogram not too dissimilar to this, whose physical state mirrored my own, in that it only had one working speaker plus a seriously blunt needle that bit into the playing surface of the records my parents possessed. The state of the machine never seemed to unduly concern them as the 'make do' ethic of the war years still held great sway in our household.

Unbeknown to me then but which I suspect now, I wonder whether in time I came to listen less to the recordings and more to the belches of static that would issue forth from the machine with some considerable violence on a regular basis and the incessant scratches of the damaged records. Maybe this observation of textures informs my working methods today, with a desire to inform the world how to listen to things around them.

Sound presents itself in many guises for it is a language beyond boundaries and certainly respects none. Setting aside the narratives of 'good' or 'bad' the request here is to listen afresh to what our ears actually do when faced with a seemingly constant, unchanging sea of static. We under appreciate the sophistication of the hearing sense often because it operates unconsciously and lacks the physical filter of 'lids.' Our brain makes a judgement on what it considers unimportant in any context and will silence what appears objectionable and yet if one persists in listening, it will seek out difference and in so doing we discover what I would call the 'listening ghost', the whisper of things themselves. Marcel Duchamp who, though often overlooked in art historical terms, had a great interest in the perception of sound and its critical evaluation and made the observation, 'We can see seeing (as in a mirror) but we cannot hear hearing.'

You approach a pebble on a beach - in its greyness it appears without life, devoid of form. But pick up the pebble and examine it closely and you reveal a very different story, suddenly the pebble has texture, weight, surface and a history - it is a world within a world.

Taking its title from the storage shelving of the room in the Shoreditch Town Hall, London in which it sat 'Mondrian Painting Circles' filled the space (and much of the rest of the basement area) with a combination of white noise and crackle from its broken speakers. A chair was also provided for people to spend as much time as they wished with the sound as it played throughout the duration of the exhibition. This piece proved difficult for many fellow exhibitors, which for me provided an interesting insight into the boundaries between visual and sound based work and the influence of auditory sensation for the appreciation of art. I enjoyed this 'confrontation' of the two, though the arguments over volume level, ironically with another artist's sound piece, I could have done without. The suggestion that it shouldn't have been allowed in the show struck me as an interesting problem for the arts establishment.

Noise equals disorder and difference in the world we inhabit; silence implies order, stasis, everything at rest. Death. 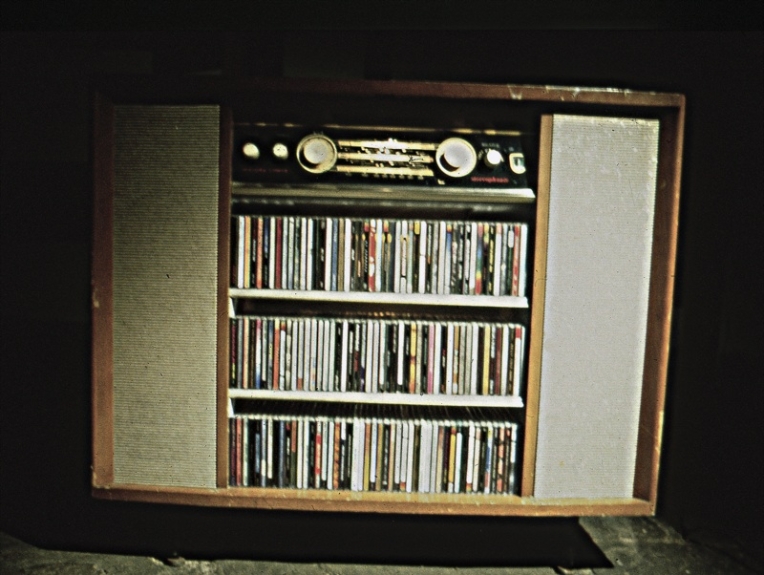