a hierarchy of experience.

In the era of so called 'post-truth', the language of academia has proved itself easily manipulated to project fake narratives in such a manner as to undermine its very authority, leading currently to a dangerous legitimacy of regressive, isolationist political thinking; one seemingly fearful and mistrusting of a cultural dialogue perceived, not without some validity, as being both elitist and a product of a failed left thinking, artists have to consider ways of engaging with these issues. Whilst wishing to explore the values of inclusion, highlighting disparity and celebrating identity, it also needs to reflect upon their opposites and address the concerns of those who feel alienated both economically and culturally.

52% of the population chose to reject the prevailing cultural hegemony with little enthusiasm for its dominant pluralist values, and instead embraced a view of segregation, seeking out an 'other' to blame for its ills. In pursuit of a tenet for basic survival, a vast section of society feel disillusioned and disenfranchised from a view of social integration and community cohesion.

Connected, always on social media, has exacerbated this sense of cultural isolation; a collective fragmentation that has created an echo chamber of self believe amplified through enclosed systems of discourse, represented by the likes of Facebook and the edited identities of Instagram, where no one seems to have a bad day sat staring at the wall.

The process of art functions as a tool of analysis and critique, illustrating the world in its myriad form and across alternative social groups. It has to avoid a position of moral superiority inherent in seeking to ignore the uncomfortable perspective of others perceived as 'wrong' and provide a channel of discourse across such divergent points of view. Seeking to shut down such narratives puts power in the hands of those who wish to restrict free speech and maintain the position of rejection. The Arts have to face up to some uncomfortable truths in regard its social makeup and cultural reach and consider how to engage the voice of those that remain on its fringe, at the periphery of culture's compass.

Education is a privilege not all can access, the artist is beholden to accept this and initiate a meaningful debate that ponders this position from a common perspective. Intellectual abstractions such as 'truth is meaningless', however real to the arts practitioner holds little water to those walking the streets. The world is very real to those struggling to pay bills or find somewhere warm for the night.

Sited at the edge of society as figures outside the control of their own destiny, the homeless collate the lived experience with all its emblazed ennui; those for whom we might have sympathy but would prefer not to see perceptive, however unwittingly, to the true nature of existence. The wheeled transportation of the homeless with its amassed luggage of carrier bags, akin to virtual shelves, serve as a repository for collective experience and memory. Their trolleys throw a spotlight on to the discarded detritus of the every day which form the shape of who we are.

The function of objects is to question the plasticity of truth and display its insincerity; to juxtapose tradition and modernity and upset expectations of both. Where a disused shop sign light box, skeletal in form serves as comment on the sense of communal decay and social breakdown, a scrap of what might be described as 'aspirational' fabric lighting flex (woven in Milan it says here) casually sited beside building site detritus hint at an imagined narrative of 'exciting new residential opportunity' and the social divisions it encompasses. In questioning the formalities of display, both in and beyond the gallery is to illustrate events in peoples lives/surroundings and seek to access subconscious (dis)approval and reflected insight.

The collection of steel piping and bundled sticks give form to the gesture of survival: a need to gather, protect or provide comfort. These could be the rods to break ones back, those to build new foundations, as weapons to fight or props for support. The unstable vitrine has its authority undermined, its prestige questioned with the display of a common shop till receipt. The visual discomfort of Victorian table legs upended, juxtaposed with an air condition cover, each pinned to a former packing case disturb and challenge the rule of social convention, of period context.

'I tear the fat faced children of bankers and kings from out their guilded frames, and in their place I put the beggar, the tavern keeper and the whore. I give us our dignity back'

Anders Lustgarten, from his play 'Seven Acts of Mercy' 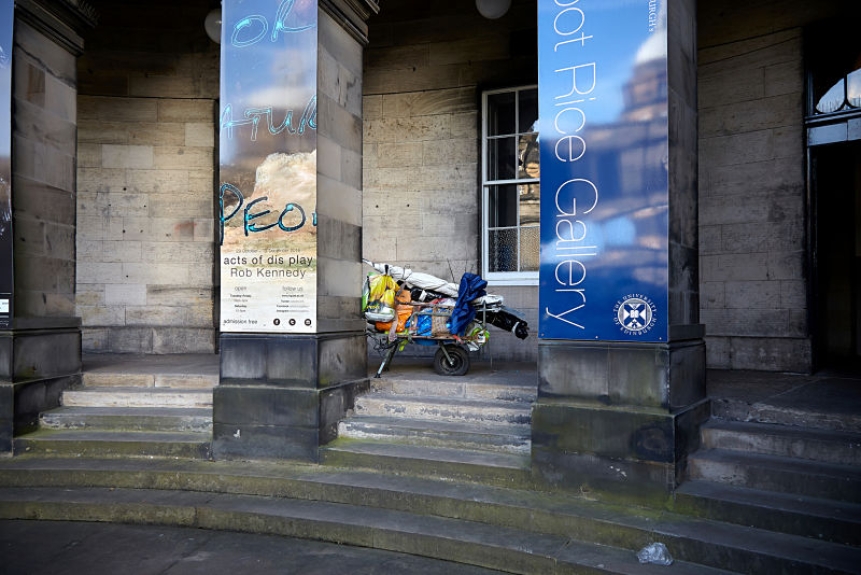